1590 – Born in Kilbarron, some two miles from the present town of Ballyshannon, he is the youngest son of Donnchadh Ó Cléirigh and Honora Ultach and is christened Tadhg. As a youth he earns the name “Tadhg an tSleibhe” because of his fondness for hunting and the outdoors.

1603 – In the aftermath of the “Nine Years War,” and the death in Spain in 1602 of Aodh Rua Ó Domhnaill, Prince of Tír Connaill, his brother Rory surrenders to the English and is made the Earl of Tír Connaill in return for his loyalty to King James, recognising the supremacy of the Crown and implementing English law in preference to Brehon law.
Mícheál is likely to have been tutored, as was his brother Maolmhuire, by M. O Hosey and James Walters at a bardic school at Baile macAogáin (Ballymacegan) in North Ormond (North Tipperary). He received education in the humanities, in history, poetry and the chronicles.

I607 – In an event known as the “Flight of the Earls” Rory Ó Domhnaill, Earl of Tír Connaill, Hugh O’Neill, Earl of Tír Eoghan and Cúchonnacht Maguire, Lord of Fermanagh, along with their families and followers depart Ireland for Spain.
As a consequence of this, their land and property are forfeit to the crown. The government begin the process of assessing the lands in the newly demarked counties of Donegal, Coleraine,(later to become Londonderry) Tyrone, Armagh, Cavan and Fermanagh with the plan to settle people of English and Scottish stock, known as the Ulster Plantation.

1609 – Lughaidh Ó Cléirigh a third cousin of Tadgh Ó Cléirigh is summoned as a juror to the Inquisition at Liffer (Lifford) on the 12th September 1609. There he states that in “Kilbarron parish -Herenaghs are the sept of the Cleries or freeholds”

1610 – Lughaidh Ó Cléirigh, author of Beatha Aodh Ruadh Uí Domhnaill (Life of Aodh Ruadh O’Donnell) and head of the senior branch of the Uí Cléirigh clan is dispossessed of the castle of Kilbarron along with their surrounding hereditary lands. The Ó Cléirigh lands are granted to the Bishop of Raphoe and to Trinity College. Sir Henry Ffolliott is granted the lands belonging to the Cistercian Abbey of Assaroe south of the river Erne in return for maintaining the castles at the Drowes and Ballyshannon at his own cost and maintaining a troop for their defence. The Abbey land north of the Erne is granted to Sir Francis Grofton. He later sells his portion to Sir Henry Ffolliott. Trinity College is granted The Mac an bhaird lands of Ballymacaward and the Ó Cléirigh lands of Cúl Reamer (Coolmore) and Keran (Coolbeg)  and Drumacrin, the latter in the Parish of Inishmacsaint near the present town of Bundoran.

1621 – On the 21st July the Spanish authorities in Flanders award a grant of two crowns to be paid monthly to Don Tadeo Cleri on account of “the persecution and loss of estate he has suffered for the Catholic cause in Ireland” This is believed to be Tadgh Ó Cléirigh.

1623 – Tadgh Ó Cléirigh enters the Franciscans, although sufficiently qualified to take up the studies of the priesthood, he prefers to become a lay brother. He takes the name Mícheál.

1626 – Br Mícheál Ó Cléirigh is given the task of returning to Ireland and compiling the Lives of the Saints of Ireland by Fr Hugh Ward, (Aodh Mac an bhaird) who was born in Ballymacaward close to where Brother Michéal grew up.

1627 – That Spring Mícheál is working “at Drowes” (the river forming the boundary between Co Donegal and Leitrim). The Franciscans of Donegal have established their monastery here (after being expelled from the Friary in Donegal years earlier). In autumn, Mícheál is in Leinster copying material in Dublin, Drogheda and Kildare.

1628 – Beginning of the year back at the Drowes. Mid-Summer in Dublin. Later that year in he is in Carlow travelling on to Cashel in Co Tipperary.

1629 – Spends the early months in North Tipperary travels to Athlone and Multyfarnham,Co Westmeath before returning to the Drowes. In Mid- summer he returns to Munster, moving onto Co Wexford, back to Clonmel and to Co Cork. He moves northwards again through Limerick, Co Clare and south Galway. By November back at the Drowes where he pens nine works including seven saints’ lives. 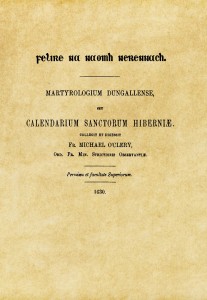 1630 – At the beginning of the year wrote fifteen works at Drowes, mainly the Saints’ lives as well as the Martyrology of Donegal. Towards the end of the year he wrote near Athlone along with his three assistants, Fearfeasa Ó Maoil Conaire, Cú Coigriche Ó Cléirigh, and Cú Coigriche Ó Duibhgeannáin. In December he returns northwards to the monastery at the Drowes.

1631 – The beginning of the year is spent extracting information for the “Martyrology of Oengus” From October to December he writes along with four assistants, Fearfeasa Ó Maoil Conaire, Cú Coigriche Ó Cléirigh, Cú Coigriche Ó Duibhgeannáin and Giolla Pádraig Ó’Luinin at Lisgoole in County Fermanagh, working on “Leabhar Gabhála Éireann” (Book of invasions).

1632 – In January begins work compiling the Annals of the Kingdom of Ireland at Drowes. The part up to 1208 is completed that year.

1633 – In August made a copy of the Martyrology of Gormon at Drowes and most likely spent most of the rest of the year collecting source material for the annals.

1634 – He spent the summer in Co Clare collecting material on the lives of the saints.

1635 – In May wrote “Beatha Mhic Creiche” at Drowes. In November copied “Cogadh Gaehel re Gallaibh” (Wars of the Gael and the Gall) During the year the second part of the Annals of the Kingdom of Ireland from 1208 onwards were compiled with work from three principal assistants, Fearfeasa Ó Maoil Conaire, Cú Coigriche Ó Cléirigh and Cú Coigriche Ó Duibhgeannáin, also helped by Muiris mac Torna Ó Maoil Conaire for one month and by Conaire Ó Cléirigh, his older brother, for a longer period.

1636 – Completed the Annals , In April writes “Naoimhshenchas naoimh Innsi Fáil” at Drowes. In the autumn he travels southwards seeking approbations of his work from scholars and ecclesiastical authorities. In addition he transcribed an Irish translation of the Rule of St Clare for the Poor Clare nuns in Westmeath and travels to Co Tipperary and to Co Clare to see scholars such as Flann Mac Aodhagáin and Conchubar Mac Bruaideadha. Later goes on to Galway to Maoileachlainn Ó Caollí (Malachy Ó’Quelly) Archbishop of Tuam, obtains approbations from them for “Genelogiae regum et sanctorum Hiberniae, Félire na naomh nÉreannach and for the Annals” 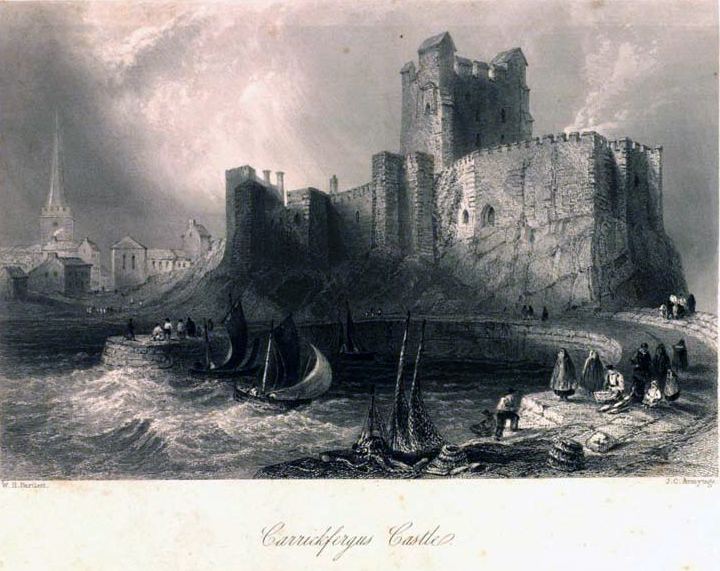 1637 – In the beginning of the year he travels to Dublin and Kildare to get Episcopal approbations for his work. He returns to the Drowes for the last time before making his way to Carrickfergus in July to return to the Continent and Louvain. When he gets back to Louvain, he learns of the death of his mentor, Father Hugh Ward who died in 1635.

1643 – In autumn 1643 he publishes a dictionary called “Foclóir nó sanasán” this is the only work by Michéal Uí Cléirigh to be published during his lifetime He dies in Louvain towards the end of the year.

1645 – “Acta Sanctorum Hiberniae” is published by John Colgan, who was born in Inishowen, it contains the lives of two hundred and seventy Irish Saints whose feast days occur in the first quarter of the year.

Fr John Colgan dies in 1658, it is he who first refers to the “Annals of the Kingdom of Ireland being the work of “quatour magistri” (The Four Masters)